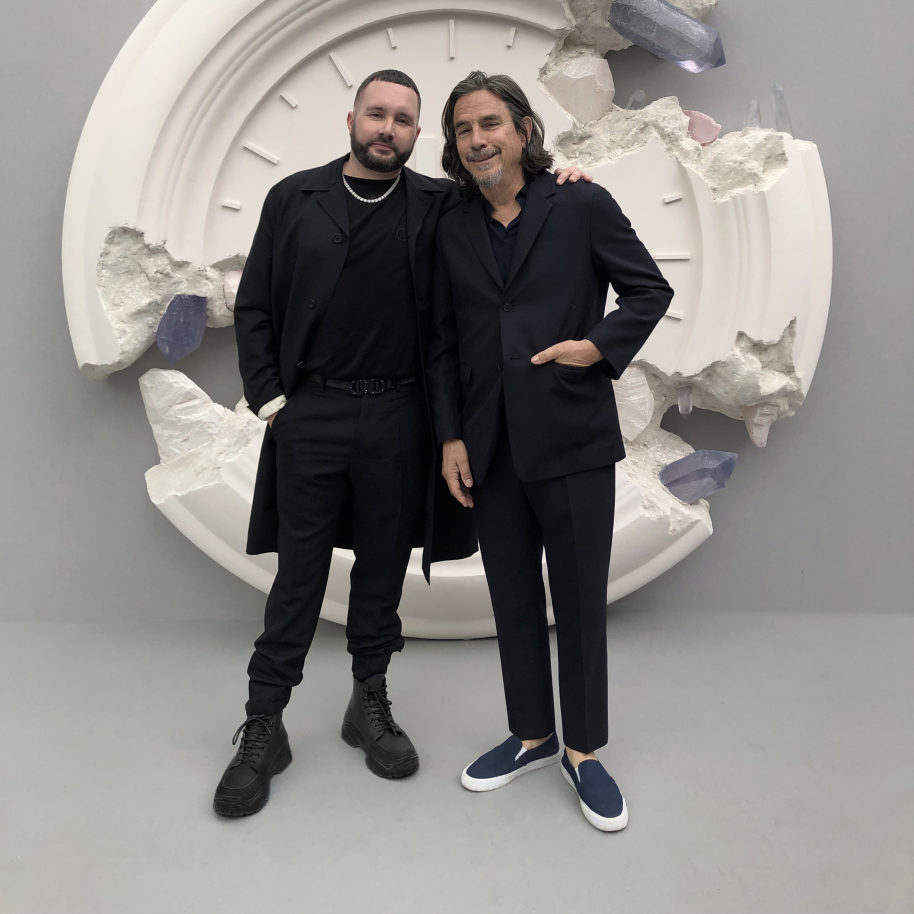 Why is Kim Jones so important in todays fashion and how did he do it? Fashion design is one of the biggest and most complicated industries in the world it has been used as a mechanism of expressing feelings, preoccupations, critics, etc. but Kim Jones has taken the industry to another level making history during all his years working with more than a dozen brands. Many se him as a brilliant completely unexpected designer that has been capable of joining worlds and aesthetics. As part of this essay I will be discussing one of his latest collections at Dior in collaboration with childhood idol Shawn Stussy.

The England born designer graduated from Central St. Martins College of Art & Design one of the most recognized fashion colleges. He first studied graphics and photography before going to fashion. Jones has worked with brands like Hugo Boss, Topman, Umbro, Mulberry, Iceberg, Kanye Wests Yeezy, and Alfred Dunhill. Apart of designing collections he has worked as stylist and director of numerous magazines like Dazed & Confused, New York Times, and Fantastic Man. Fashion awards and nominations have been presented during his career like the British Fashion Award on menswear designer of the year which he has won 3 times and the Topshop New Generation that he won twice.

In 2011 Kim Jones was called to be the new style director of men’s ready to wear at Louis Vuitton. He worked with the brand for seven years and announced his departure on the next day of his A/W 2018 collection. At Louis Vuitton is when he starts and formalizes one of his mayor accomplishments, joining couture with streetwear. This was a never-ending battle for many designers, but Jones made it work in the best and most successful way possible making it look very easily. In his days at Vuitton he makes one of the greatest collaborations of all time with the street wear giant Supreme in June 30th, 2017.

“The Supreme thing came from [Louis Vuitton CEO] Michael Burke asking me for [Supreme founder] James Jebbia’s number. I knew James from Gimme 5, because they used to import Supreme into the U.K. So I said, ‘I’ll give you the number as long as we can do a collaboration.’ ” (Jones 2019)

This collab marked the beginning of a new era and its results were amazing. The drop took place all over the world on distant locations with lines of hundreds of people wanting to get their hands on anything they could because of the extremely high demand. It showed that Kim Jones brilliant mind not only could mix garments but also brands.

Right after he leaves Louis Vuitton, he became the creative director of Dior men. On his first collection Jones showed that he also could hit the futuristic tailoring style. Color and textile picking are always great, and the shows are one of the best qualities of the Christian Dior house it is like there is no weak part on his collections.

“I look at things some people write about creativity, and they’re like, <<‘It’s all led by marketing,>> ” Jones says. “But it’s kind of an ignorant thing when people write stuff like that. I like working to a creative brief and being commercial. It’s the path you choose, and not everyone is going to be Rei Kawakubo. She’s Rei Kawakubo, and she’s brilliant. We have targets to reach, and I find that exciting.” (Jones 2019)

This perfectly explains his way mindset and why he is so great with all his designs. Jones way of thinking is on how to make a great and strong brand better. He always incorporates artists to work with him for the runway show experiences.

“I’m curating what a modern Dior would be looking at,” Jones says. “For example, Raymond Pettibon’s romantic vision compared with a Jean Cocteau. Daniel Arsham’s work in terms of Dalí. Kaws in terms of Picasso. You have to look at those things in terms of where we are now.” (Jones 2019)

One of Kim Jones most iconic runway to this day at Dior is the fall 2020 in collaboration with Shawn Stussy.

This collection marked history in many ways from location to footwear. It was the first runway done by Christian Dior out of France, it was presented in Miami, Florida. Along with the normal Dior garments something special for Kim Jones and the whole world was presented and that was the first ever Dior / Nike collab with sneakers. This time it was not streetwear but sportwear which was implemented in the historic runway.

“A new Dior Air sneaker made in Italian factories using the same leather found on the French house’s bags and featuring the trademark swoosh in the Dior Oblique logo jacquard had its coming out on tonight’s runway. “It’s been upscaled,” said Jones, who would know. Air Jordans are one of the things the designer collects; he has upwards of 40 pairs. But the famous sneakers were only the beginning of the street/chic blending here.” (Phelps 2020)

A small collection of knitted garments, shorts, and sweatshirts was also latter released in collaboration with Dior. Along with these astonishing moves the most important part of the collection was the integration of Shawn Stussy bringing him out of retirement. Shawn is recognized as the godfather of streetwear as he was one of the people who started this culture worldwide from one place to another making parties and exclusive drops. The Stussy brand started in California were its HQ are currently placed. James Jebbia the Supreme founder worked with Shawn long time before he created his billionaire company that was more based in New York and more focused on skating. Without the help of Stussy and everything he learned from him it is very unlikely that his success would have been the same.

For Kim Jones, Shawn Stussy was a childhood icon and working with him was like a dream come true. Their collection will be remembered for generations to come. The hype that people felt with this astonishing work showed instant results in the sales area by making sold outs with many garments that had everything the fans were looking for.

Jones began buying Stussy at 14 with money he saved up from a job washing dishes at a cafe, and he remembers copying Stussy’s familiar scrawl in his school notebooks. “I don’t choose people just because they’re famous,” Jones said. “When something becomes as iconic as that, it’s in the culture, and culture is what I’m interested in.” (Jones 2019)

“I used to wear it head-to-toe all the time in my teens. It was something I was really, really, really obsessed by. I’ve [still] got boxes of it. […]For me to work with someone like Shawn is a real honor. He’s an artist, that’s the thing. If you can work that line like that, and it’s that memorable, it’s like an artist. That’s why I wanted to do it with him: he’s made an iconic image with his hand.” (Jones 2019)

Shawn took his line with writing and gave the Dior name his own twist making it look the same as if it was his own brand. He also takes the brands iconic bee and changes it in a stussy way. The collection brings youth and the spirit of the new game on each and every single garment, jewelry, and footwear piece. The Stussy brand is one that has also taken Shawns hand writing and gave it many twists with phrases or even whole paragraphs printed to shirts its like if they had Stussy’s hand writing computerized which would probably be the case. His own brand keeps on breaking boundaries no matter the fact that its founder is no longer with them. They kept his legacy on a high rate and hasn’t failed him in any moment now that the brand has been more than 20 years without him.

“Not in a million years would I have thought that I would be working with Dior,” he says. “Maybe I dreamed about it, maybe there was a dream but never a reality to be able to make this kind of level of clothes.” (Stussy 2019)

“Now I feel fresh because I want to do this and I don’t have to do it,” says Stussy. “It’s Dior – come on, it’s the top of the top. I’ve been asked many times by other companies [to work with them] but it was just doing the same thing I was doing before, so it wasn’t interesting. (Stussy 2019)

“This had the potential to be a project out of my comfort zone and taking me to a different level of technique. The fabrics, construction – everything is on another level.” (Stussy 2019)

They transformed it to pieces that were all dyeing to have in our daily outfits. Embroidery is a big part of the collection with art from Stussy’s hands. As cited Shawn was offered many collabs but only Kim Jones made him say yes and participate on this historic process.

“Evidently, the good vibes have continued to flow. Spanning clothing, a surfboard and now tableware, this creative partnership is the gift that keeps on giving. And we take absolutely no issue with that.” (Campbell 2020)

As shown on top the collab between these two magnificent designers went on to be implemented in surf boards that were the main passion of Stussy and many other things like tableware (cups and plates). This project shows how great the designs by Shawn Stussy were and Kim Jones making his mark on Dior once more.

Generally speaking, Kim Jones is already a legend in the fashion industry and hasn’t even retired. He is only 47 years old and has lots of years ahead to keep “shocking the world” like one of his shirts at the Dior fall 2020 says. Recently giving to his great background Italian based fashion house Fendi has called Jones to be the head designer of its womenswear line which was managed by the late designer Karl Lagerfeld. This is a mayor step on Jones fashion career now that he will be managing two brands at the same time and of opposite sexes. Many are desperate to see how his great masterpieces will look in this new stage of his life.