The Words Are Not the Story: Intellectual Ambition in Didion and Nabokov 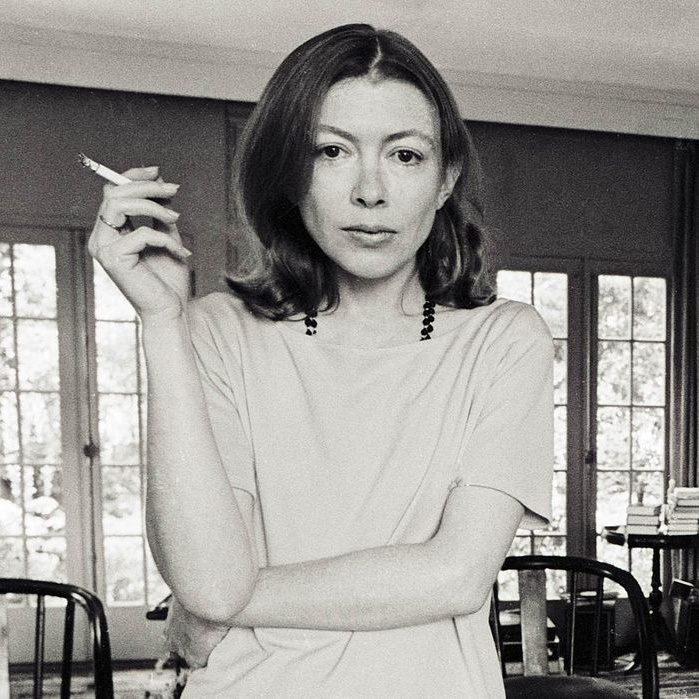 Lately I’ve been thinking about ambition.

Earlier this year, a friend came to town on a book tour. He’d published his first novel, a 272-page series of vignettes with the dimensions of a grocery store paperback. Each chapter, I’d guess, averages about three or four pages, though many are only one and some are as short as five lines. White space abound. The whole thing maybe 20,000 words. It’s a very good book: sturdy and compact prose, sizzling social satire. It’s a bit like DeLillo, but somehow, reading it, I get the sense that he just couldn’t suss the book into a full-length novel. It doesn’t read like a novella—its plot is far-reaching and runs the whole track from the hyperfocused personal to the wildly grand institutional, taking on a couple’s infertility, a noirish FBI investigation and big pharma all the way up to the corporate boardroom—it reads like a novel that just didn’t have the energy to congeal all of its parts into a whole. Instead, it exists in choppy vignettes, and while this stylistic choice feels like it must be considered on its own terms (and thus I’d deem the novel a success), something about it leaves me feeling unsatisfied: it’s not the writing, but what’s behind the writing that feels slightly, well, slight.

This is the feeling I had when I first encountered much of the early work of Joan Didion. It is effortlessly readable, but some of it didn’t feel fully fleshed to me. Take the final paragraph of “John Wayne: A Love Song” for instance. It seems to me not to serve any notional trajectory of the piece on the whole, but merely acts as an elegant escape from the story. And it is prosaically elegant: “And then something happened.” A weird little knock on our attention, after we somnolently follow Didion, Wayne and their spouses into drunkenness in the previous paragraph. “Suddenly the room seemed suffused with the dream.” The sentence’s alliteration moves from front-loaded sybillants “suddenly” “seemed” and “suffused” into the dental backs of those latter two words which hook back up with “dream,” a rhyme for “seemed.” It’s gorgeous, and additionally so because of the restrained abstraction of “the dream.” The paragraph ends with perhaps a touch of sentimentality—“even now I can hear them, in another country and a long time later, even as I tell you this”—but it’s not the sentimentality that bugs me. It’s that lyrical logic, which seems to me not wholly satisfying (39, Didion).

I am not sure if what I am decrying is only a reflection of my personal anxieties. You see, I am a poet going through a bit of an identity crisis. Often in the past year, I’ve found myself wondering if poetry is the path I’ve chosen because of some relative ease I perceived in it. The obvious evidentiary trait is the length of the average poem as opposed to most prose, but it’s less the length that interests me than the capacity for “mystery” in poetry. Recently I interviewed the poet Saeed Jones for a profile and he said something I’ve been mulling ever since. “Poems are always straddling mystery and clarity,” he told me. “And [often] when we’re working on poems…anything that actually isn’t working, we chalk up to mystery.” If this mystery is something I perceive in Didion’s earlier work, perhaps it makes sense that I’d have an aversion by now.

Even in Nabokov, it is less his stylish prose than the cohesion of his grander intellectual inquiries that is impressive. Ambitious wordplay occurs to me as a sort of diet version of ambition. Anyone can develop a knack for scatting. And even elegant or precise physical description seems equally incomplete as indicators of good writing. Throw a gaze at something long enough and you can recite all the details (and Nabokov seems to have had the lucky break, in the writing of his memoirs, of an incredible memory). These are skills which require plenty of practice and consideration, but they are not abstract skills. When people wonder whether writing can be taught, these are the skills that seem most obviously to indicate that it can.

I am not sure, on the other hand, that one could teach a writer to approximate Nabokov’s deeply considered description of a mental process in Chapter 13 of Speak, Memory.

“Whenever I start thinking of my love for a person, I am in the habit of immediately drawing radii from my love—from my heart, from the tender nucleus of a personal matter—to monstrously remote points of the universe. Something impels me to measure the consciousness of my love against such unimaginable and incalculable things as the behavior of the nebulae (whose very remoteness seems a form of insanity), the dreadful pitfalls of eternity, the unknowledgeable beyond the unknown, the helplessness, the cold, the sickening involutions and interpenetrations of space and time. It is a pernicious habit, but I can do nothing about it. (296, Nabokov).

What appears to be the “true test” of the writer’s ambition is getting logics and equivalencies that were not immediately apparent to their readers to congeal into systematic wholes that feel complete.

Funny, then, that we might have discussed the unwieldy structure of Didion’s essay on the Central Park jogger, “Sentimental Journeys.” While its structure was, as noted in lecture, rather labyrinthine, I would argue that this is what makes the piece feel hefty enough to warrant a close reading. The Central Park jogger storyline, while certainly a newsworthy one, holds up less timelessly than the point which she begins to introduce in section 2 of the piece: namely the “lazy criminality” of New York City and its population’s need to impose a coherent moral narrative to justify life in the city. That she finds this moral narrative to be a false construction seems to align her with Frankfurt School critical theorists, one of whose main tenets was that societal narratives conceal as much as they reveal.

Perhaps it betrays some pretension on the part of the critic, but I find this to be a far more ambitious and thus satisfying story for Didion to be telling. When we look back at her earlier work, while all of it is incredibly technically skilled and there are always hints of an imperative to “uncover something a little uglier” (we see Joan Baez as sort of a well-meaning dolt, John Wayne and his buddies as a bunch of bros putting on airs, the Haight crowd in “Slouching Toward Bethlehem” as mere children playing at intellectual discovery), what she uncovers does not have the same weight as in “Sentimental Journeys.” Again, however, these pieces served a different purpose: most of them appear to have been magazine pieces, collected in a compendium of really stellar magazine pieces. Thus they can certainly be considered successful on those terms. For this reader’s money, the far more interesting pieces are the ones she seems to take on later in her career, where the “magazine piece” format is peppered with the more comprehensive meaning-making system of critical theory.

One sees that as a central tenet from the very get-go in Nabokov, with his ludicrously famous opening line in chapter one of Speak, Memory: “The cradle rocks above an abyss, and common sense tells us that our existence is but a brief crack of light between two eternities of darkness” (19, Nabokov). The memoir genre is (at times rightfully) berated for its navel-gazing aspects, and Nabokov’s gaze, as mentioned, is so steadfastly turned in on himself and his experiences that one wonders how he could possibly remember so much of his own life. But he signals in that opening line—partly with its intellectual weight, partly with the employment of the plural first person—that his ambitions are broader than uncovering a single truth about his subject (himself). Instead, he will attempt to place this subject within a grander and more universal context.

It makes little sense, to be fair, to set up a contest between Speak, Memory, a book with a singular mission written rather deep into Nabokov’s career, and the pieces of Slouching Towards Bethlehem, Didion’s first collection of nonfiction. I do not intend to praise late Nabokov at the expense of early Didion, but merely to find what, in these pieces, makes them more or less satisfying to my own intellectual predilections. That it seems clear that Didion’s intellectual ambition becomes a bit loftier as her career develops offers me a useful framework within which to consider “career development” in writers.

Perhaps the great promise my friend exhibits in his first novel will expand into more complete works of literature. Perhaps my chosen path of poetry will prove not to be a canard within my career so much as a training ground. What seems clear is that the developmental work of a writer cannot be completed in his or her youth. Even once the master’s degree is completed, even after the first book and the second book, the work is never done. A writer’s “job” is never done. I recently encountered a pithy little meme in a graduate student forum online: “it’s never done, only due.” Even if a writer never works for a magazine or a newspaper, never goes to graduate school, his or her pieces at some point must be due. And the slog must continue. The work must never become easy. As skill expands, so must scope. And if a writer ever happens on eternal life, maybe one book will ever be fully completed.